Your Energy Bill May Skyrocket! Switch Now to Save Money 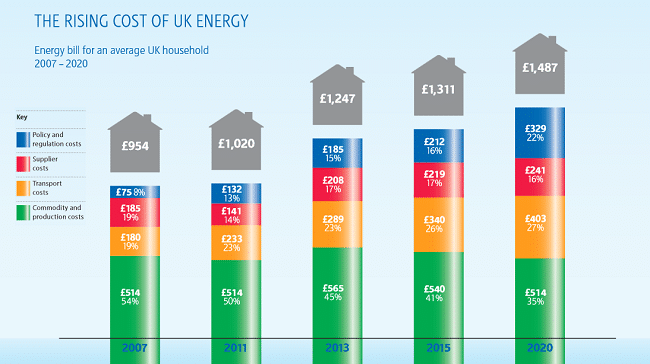 A huge number of fixed tariffs are set to end the January 31st. Thousands of people may see their energy bills skyrocket, unless they act fast to switch energy providers.

Households on a fixed tariff may see their energy bills increase by £190 a year. About 47 fixed price deals will come to and end this month. However, customers can avoid this increase by switching their tariff by the end of January.

Experts say the average increase in energy bills will be £114; however, some households could see increases up to £190, which is about a rise of 19%. That’s quite a shock, especially coming directly after the holidays when many people’s bank accounts are low.

As a result, customers are being advised to see when their current tariff deal ends, and then to make the switch to a new supplier before the end of the month, when the fixed tariff rates are set to go up.

This is the time of year when finances are generally at their lowest. According to the Office of National Statistics, credit card debt has continued to grow. In addition, the Bank of England has said household holiday spending increased by £800 last month.

Another financial challenge facing many households is the fact that this month will have the longest wait for payday for this year. As a result, many energy customers find themselves in debt, and facing increased financial difficulties after the Christmas holiday.

Households who are on the fixed tariff, which is ending later this month, who choose not to make the move to a cheaper energy tariff, will be automatically enrolled onto their energy provider’s default tariff, which is called the standard variable tariff.

The problem with this type of tariff is that it’s one of the most expensive on the market. These plans increase about £114 a year. However, some customers could see a higher increase in their tariffs, especially those who are with EDF, Shell Energy and Scottish power.

The good news is that Ofgem, the UK energy watchdog, plans to announce a new price cap at the beginning of February, which will be lower than the current level of £1,179. The bad news is that the new lower cap won’t come into effect until April 1st. Ofgem will again review the cap in six months.

The price cap, designed by Ofgem, is supposed to help customers who are on standard variable tariffs. However, customers on the default tariffs may still be overpaying their energy bills by about £300 a year.

Cordelia Samson, an energy expert at uSwitch, said, “People are already feeling the strain on their wallets after Christmas, and the last thing they need is for their energy bill to go up.

“Anyone whose fixed energy deal is coming to an end soon will be rolled on to an expensive Standard Variable Tariff if they don’t choose a new, cheaper plan. So now is the time to take action.

“In the past six months, we’ve seen the lowest-priced deals becoming even cheaper.

“Households can take advantage of more than 50 fixed deals available for less than £1,000 a per year and switch now.

“If you switch to a fixed deal this time, make sure you also sign up for a reminder to alert you when the plan is next due to expire – to keep you firmly in control of who you give your hard-earned money to.”

The best fixed deal currently available is by Utility Point. Its “Just Up 20 Wk02 Direct Tariff” costs about £828 a year.

If you’re looking for a more environmentally friendly energy tariff, you’ll find the cheapest plan is with Gulf Gas and Power. Its “Gulf Home Renewable” tariff costs about £831 a year.

When checking the Bix Six companies, the only one with a tariff in the top ten (see table below) is by EDF. Its “Simply Only Jun21v6” tariff costs about £890 a year.

If your current fixed tariff is ending this month, now’s the time to see if you can switch so you can save money. Use the table below to help you find the best possible deal.