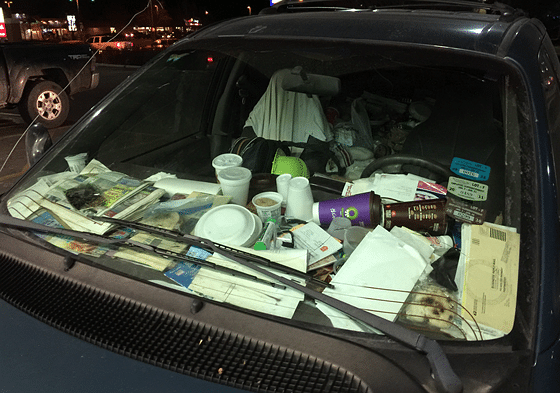 Back in July, Hampshire police fined a motorist when the person failed to use the handbrake while his Volkswagen was parked. While the car was in park, it managed to hit another vehicle because the handbrake was not on. When police arrived to the accident, they found the Volkswagen was filled with rubbish making it impossible for the motorist to even find his handbrake in order to use it.

Police took photos of the inside of the car and put the images on social media, hoping this would be a warning to other motorists that driving with a huge mess in the car could be dangerous. The pictures show the car is filled with all types of rubbish including fliers, carrier bags, desk fan, flowers, take out bags and more. Police judged the area around the driver’s seat to be danger, making it difficult for the driver to manage his car. The Volkswagen owner was fined as a result.

This is not the first time a fine was given for having a messy car. In another incident, a driver was fined for carrying a large number empty crisp bag in his car. Police fined him £300 for the rubbish in his car.

According to RAC, rubbish in a vehicle can also cause the owner’s auto coverage to be invalidated. This is due to the fact the mess can be considered a hazard to other drivers. The mess in the car can make it difficult for drivers to correctly manage their vehicle. Not only this, but having a dirty windscreen, hanging air fresheners that block the driver’s view, etc. can cause car insurance to be cancelled.

This is also covered in road laws in the UK. Road Traffic Laws say that, “No person shall drive or cause or permit any other person to drive a motor vehicle on a road if he is in such a position that he cannot have proper control of the vehicle or have a full view of the road and traffic ahead.”

In addition, the Highway Code says, “Windscreens and windows must be kept clean and free from obstructions to vision.” In other words, police can stop you if they find the windscreen is too dirty or in some other way obstructs your view. This also includes rubbish or other items placed on the dashboard.

Dirt on the outside of the car can also cause you to be fined and lose your auto insurance. For instance, if your car’s extremely dirty and the license plate can’t be read, this is against the law. A car’s license plate must be readable at all times.

Under these laws, police are able to clamp down on drivers whose vision is obstructed or who have too much rubbish in their vehicle. And under these laws, your car insurance can be invalidated.

So, it’s a good reminder to keep both the inside and the outside of your car clean at all times. Keep rubbish and other items off the dashboard, make sure your vision of the road isn’t obscured by anything (dirt, air fresheners, etc.), and at the end of each day, clear the rubbish out of your car to keep it from becoming a hazard. If you’re having trouble operating the car correctly due to rubbish, it’s time to clear it all out.

Keeping your vehicle clean will save you large fines, which can run up to £1,000, but you’ll also avoid invalidating your car insurance coverage. You’ll save money and be a safer drive, too.