London’s Taxis Parked Due To Lockdown 2 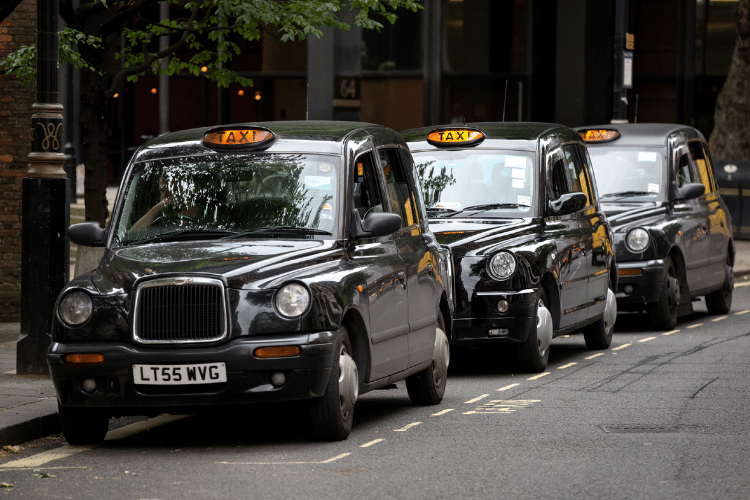 The Covid-19 pandemic has hit business across the board, making it almost impossible for some workers and companies to earn a living. Black cab drivers and business owners are no different.

According to recent data released by Transport for London (TfL), the number of licensed taxis in the capital has suffered a major decrease from 18,900 in June, down to 15,000 in November. In addition, the Licensed Taxi Drivers’ Association (LTDA) says that only about 20 percent of cabbies are still driving their vehicles.

General secretary Steve McNamara has said cabbies are earning “starvation wages” that only about 25 percent of their normal wages and are “doing desperate things” to earn an income. This includes selling their taxis way below market value, just to earn a little bit to get them through the next few months.

McNamara went on to say that the pandemic has been a complete nightmare for drivers. They’ve fallen through the cracks in the Treasury’s furlough plan. These include cabbies who have just bought new electric taxis valued at £65,000 and those who receive a small pension from previous jobs. Many have had no income since March, according to McNamara.

He said, “We’re in a position now where London could lose this icon. We’re a very viable business. We’re an integral part of this city’s DNA.

“We need a specific package that’s targeted towards taxi drivers in London just to help us get through this.”

LTDA figures also show that drivers at Heathrow Airport’s taxi feeder last month sat an average of nine hours before receiving a dispatch request to pick up a passenger.

In addition, black cab firms have been forced to hire fields and farmland around the city to store vehicles that have been handed back by drivers in recent months.

GB Taxi Services, a North London based rental company, has seen the occupation rate of its fleet of 10 black cabs go down from 95 percent (before the crisis) to just 10 percent. This, even though they’ve halved their fees to encourage drivers to hold on to their vehicles.

This is one of two cab firms in the area that are renting farmland in Epping Forest, Essex, to store about 200 unwanted taxis just so they could stop paying to insure them. However, this plan hit a huge snag when thieves stole catalytic converters and diesel particulate filters from about 50 of the vehicles.

Simon Georgiou, a director at GB Taxi Services, said, “We got our knees taken away with Covid and loads of vehicles getting handed back. Then this theft happens, which cost in excess of £120,000. We’re in a right mess.”

Sherbet London, another rental firm, has hired a car park to store 400 unoccupied cabs, which is about two-thirds of its fleet. Chief executive Asher Moses said, “The whole trade has suffered. There must be 2,000 taxis on fields at the moment.” He said ministers have failed to deliver on their commitments during the pandemic.

Mr. Moses went on to say, “When Covid struck, we had the Government say ‘don’t worry we will support businesses like yourselves’ But unfortunately they did not, and they left us out to rot.”

In the meantime, cabbies are working hard to make ends meet. Some have even become creative in the way their approach to the business.

For instance, some cabbies are giving tours around London, to view the Christmas lights, and more. However, even that has not been a lucrative effort, due to the second lockdown.

Mr. Conteh, who rents his taxi from Frame Right Engineers said, “My cab was sat on my drive for around six months during the first lockdown. I couldn’t use it at all.

“During the second lockdown, it’s been like trying to drive on Christmas Day when there is no one around. I did four jobs yesterday. Last week, I went to work on Monday for almost five hours and didn’t do one job. It gets to you as you’re doing everything you can and all you can see is other taxi drivers with their lights on going around. So, it’s not like you think maybe it’s me and I’m unlucky.”

Mr. Conteh has tried giving guided tours around London, he added, “It was my daughter Che who read and saw an advert from a local taxi driver in Hertfordshire.

“I can pick people up from a station in London and drive them around to see the lights, pick them up from where they live, and they can stop off for photos. Hopefully, it might start taking off more towards Christmas as we’re in lockdown now. I’m hoping once it ends in early December people might look forward to going to see the lights.”

Ms Prayer earns her income renting out taxis but says her business has more than halved since the pandemic began. This even though she’s still paying over £8000 per month on insurance.

She said, “We have four units on an industrial estate with a large yard for parking. At the beginning of April, our yard was full of parked taxis, there must have been at least 40 and the rest of our fleet were on drivers’ front drives.

“I have to say when I saw our yard full of taxis I just cried. We have worked very hard over the last 45 years to build up our garage and at our ages, I’m 66 and my husband 69, we thought we might be able to relax a little.”

Ms Prayer said they do have an MOT station and they can repair MOT cars. This does help somewhat. They also have a body shop that can repair cars that have been damaged in accidents. However, she’s worried the business will have to eventually let some employees go if business continues as it is now.

Cabbies Turning to Other Industries & Trades

According to Farley Freeman, fleet owner at R.E. Cantwell Ltd and Vice Chairman of London Motor Cab Proprietor’s Association (LMCPA), his firm has suffered considerably during the pandemic. He said, “Black taxis in London rely heavily on business in the city, theatres, entertainment, exhibitions, tourism, nightlife, restaurants, and clubs – all of which has disappeared, leaving drivers no choice other than to obtain jobs in other trades and industries.”

While the pandemic continues to rage, it looks as if the black cabs of London will continue to suffer. Is there any hope they will survive Covid? Only time will tell.