Can Motorbikes Ride on Water? 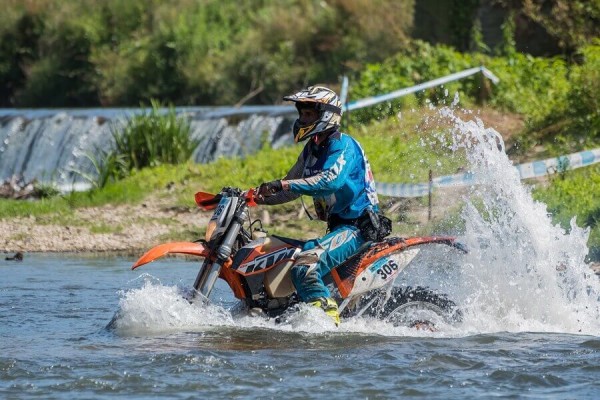 Most readers like myself would probably have never comprehended such a question as we all know that bikes sink, right? Well in fact we would all be right in assuming so but one rider has customised his bike to ride on water.  Not any rider but Robbie Maddison who is famed for his stunts from jumping Tower Bridge to his world record jump of 392 feet. So how did he do it?
Initially Robbie created some conceptual drawings in how to make his bike float by mounting snow mobile skis under the bike. He then took his drawing to an engineering company to bring his idea to life. After having the skis applied Robbie was ready for his first prototype test. Unfortunately as soon as Robbie hit the water he was out of control. It was at this point that Robbie started to question if would ever get his bike to ride on water. However Robbie doesn’t quit easily.  Back to the drawing board Robbie decided that he needed wider skis and decided that custom skis would do the trick. Back to the engineering company they applied some sheet metal skis to his bike and fitted a sand tyre to the back of the bike which would act like a paddle. The next day Robbie took to the water and took off like a bat out of hell. To keep the bike afloat Robbie explains “I have to keep it full-bore or it all goes wrong! If you need to slow down you can’t shut the throttle, you change gear to let the revs control your speed. If you back off you sink, it’s that simple. Controlling the bike is very hard as it doesn’t want to go straight. I keep as much of my weight to the back of the bike as possible. The bike is riding on the rear ski and by shifting my weight on the pegs and digging my heels into the bike I can make it turn… most of the time.  It may look slow on the video but my top speed is 58mph, and if you aren’t going over 30mph you won’t float, so it’s a pretty wild ride. Riding on water has been the biggest joy of my motorcycle career; it’s awesome – especially when you overtake a jet ski!”
To view Robbies ride on water check out the video in the YouTube link below
https://youtu.be/lDi9uFcD7XI